Specialisig in opera and symphonic music, we have been working for years with Metisfilm Classica to realize DVDs and CDs of operas for Dynamic, Italian leader in the production of classical music since 1978 located in Genova, and for Unitel Classica, a German company located in Munich, which owns many monothematic channels of classical music in more than 30 countries, among which Italy, Germany, Spain, Japan, China and South Africa.

We have a breakthrough live broadcasting mobile unit, provided with the best technologies available on the market for production, audio post-production, TV live recording or live streaming.

We produced the surround sound of the first opera in the world broadcasted in 3D (Verona Arena, June 2012) and we contributed to the publishing plan “Tutto Verdi” (Unitel/C-Major). 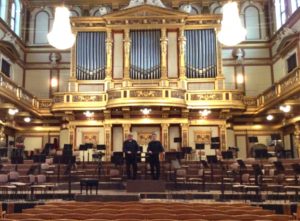 Thanks to Metisfilm Classica, since 2013 we have developed an important partnership with the National Centre for the Performing Arts (NCPA) in Beijing (CHN). This partnership led to the recording of the following operas: “Un Ballo in Maschera”, “Turandot”, “Otello”, “Carmen”, “Aida” (first take of an opera in 4K), “Simon Boccanegra” and “Macbeth” (with Placido Domingo as the title role).

Recent productions include: “Kovancina” from the Teatro alla Scala in Milan, “Domingo Gala 50” and “Il Trovatore” from the Arena di Verona (broadcasted on 3SAT and ZDF television), “Alcina” and “Simon Boccanegra” (live on Medici.tv) from the Salzburger Festspiele.